October rolls around again! I wasn’t allowed to celebrate secular holidays growing up (lol, don’t ask), and I was always the most salty about not getting to do halloween, because it seemed super fun. I went to a primary school that even encouraged participation, and I always wanted to dress up. Let’s pretend there is not a direct correlation into the whole me doing cosplay full time thing right now.

Anyway! Let’s talk about how I’m celebrating this year.

I love horror movies. I love all different kinds of horror movies now, but when I was, y’know, 12 or so and discovering the genre, I specifically loved slasher flicks. Nightmare on Elm St wound up being one of my favourites, but I was actually introduced to it by the early-aughts classic, Freddy Vs. Jason.

Even if you’ve seen that particular masterpiece (I will not be taking criticisms on this subject right now because I am correct), you might not be familiar with the Kotobukiya company. They make anime statues, more or less. One of the statues was a set from Freddy Vs. Jason, which looked like this: I can’t believe I haven’t cosplayed these two before, because these designs are super cute! But I decided to do it this year — okay, I decided to do Freddy at first, but then when I couldn’t find anyone to do Jason, I decided that I’d also do that, and then the costume wound up being fan-funded! 😭💕

I did a couple of location shoots this year for these, which I’m so pleased with! You might recognize this first one, where I shot Bishoujou Freddy — 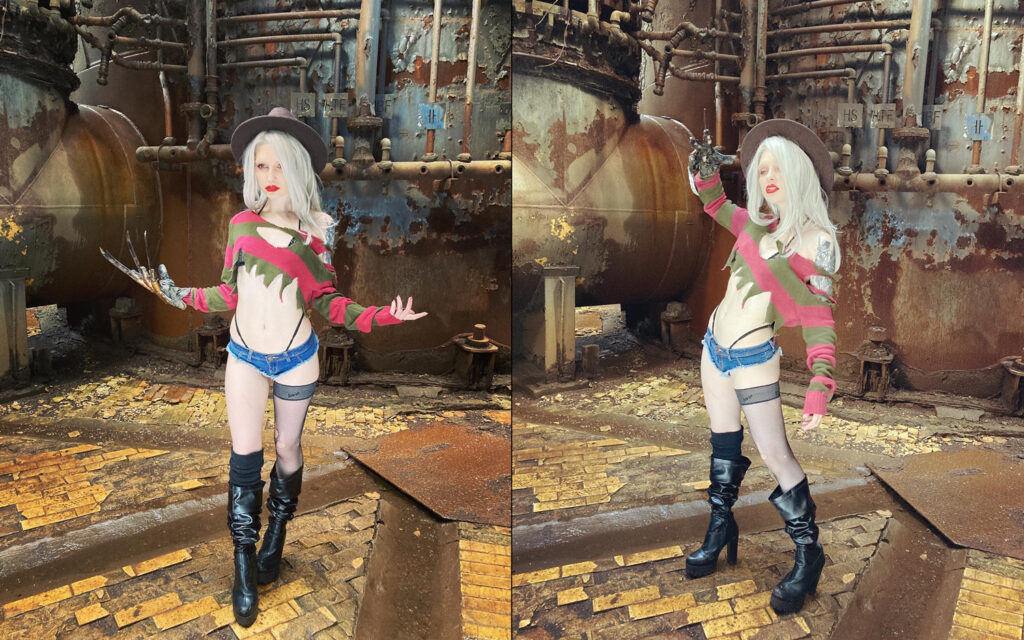 These aren’t even the finished images — these are completely unedited behind the scenes photos, taken on my phone, by a friend who was also holding the reflector for Paul! Can you believe it? Even these are so good, I’m so fucking excited to show you the final images! 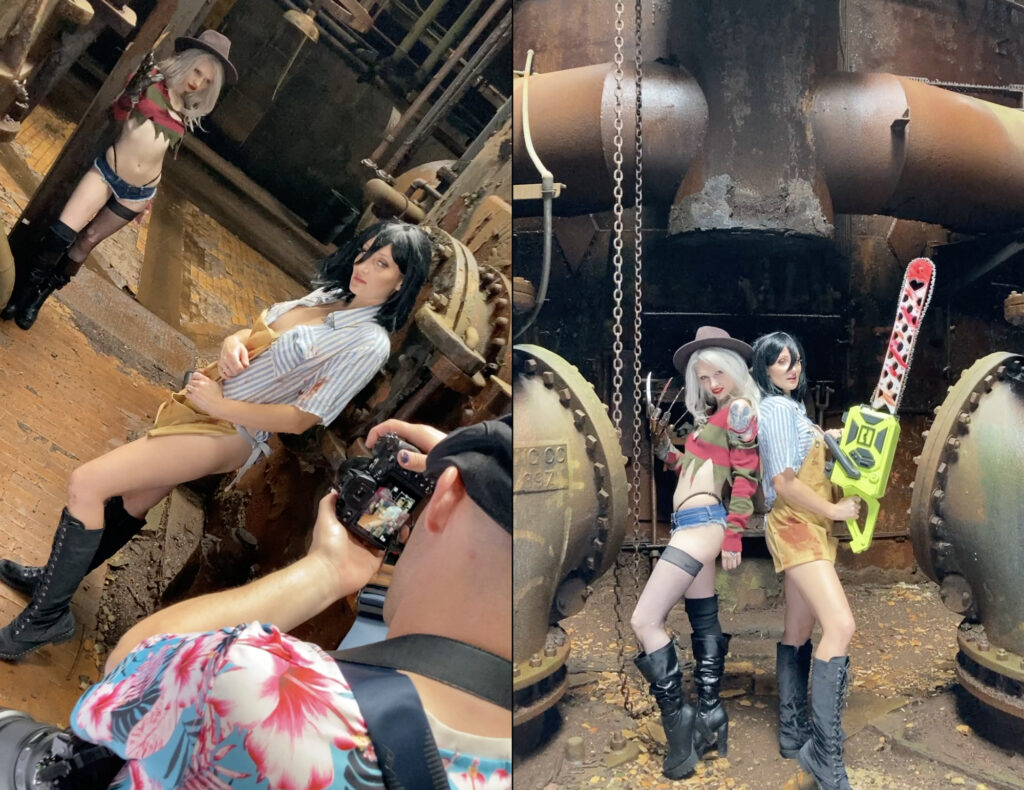 Did I forget to mention, there’s also a Bishoujou Leatherface, in the same lineup? Silly me. Holly Wolf brought this huge chainsaw all the way from Canada, down to the Carrie Blast Furnaces in Pittsburgh. These photos are both just video stills from Behind the Scenes videos on my phone — again, from a friend who was also holding a reflector. The space is so gorgeous, there’s almost no editing needed — but! I’m still dying to show you what Paul’s photo’s look like (as shown here in the very loud shirt), there’s nothing quite like the in-camera lighting and mood that you can’t quite get on a cell phone.

That’s, of course, far from all, though. I showed you Bishoujo Jason, above, too — I had the perfect location for Jason, and it happened to be midway along the route from Toronto to Pittsburgh! So we stopped by for a night, and a late-night photoshoot that was just *chefkiss*. 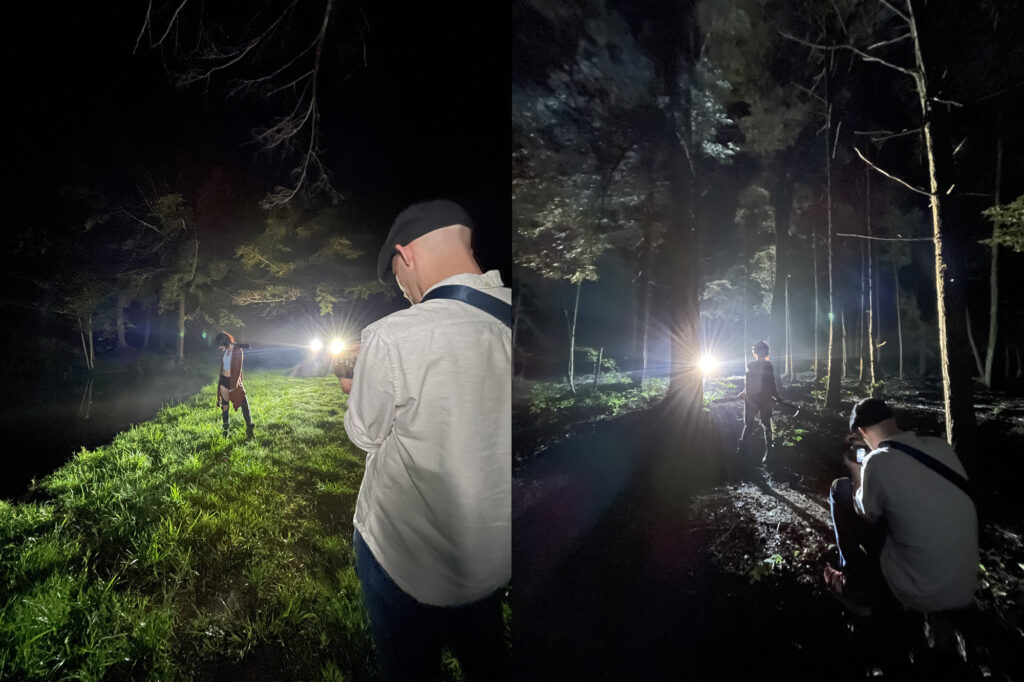 Again — just cell-phone snaps! We lit these primarily with the four-wheeler we were using to get around the property (and one LED lighting stick for fill, in some cases), and it turned out really cool. It felt very Camp Crystal Lake-y.

So you’ll receive photos from all of those sets this month, but that’s not all! If you follow me on any social media, you probably saw that I revisited another recognizable place just this past weekend — which is what made this writeup late this month. 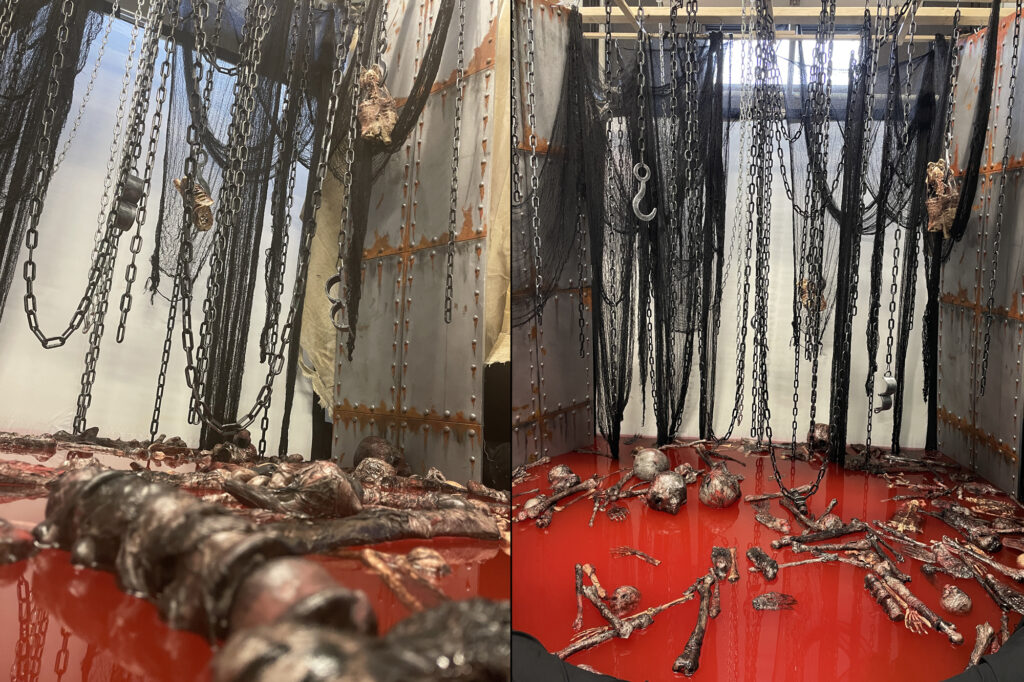 We did a version of the Blood Pool photoshoot last year as well, which gave us the original Blood Pool photos with Zagreus. this year, we decided to do something a little different with the set, and Dangerous Ladies fabricated a hanging frame for all of these chains, as well as made the walls hanging to the side. I’ll do a better writeup post about this set, and shooting there, soon, but in the meantime —

One of the looks I shot was Bishoujo Freddy! Because — well. Obviously. 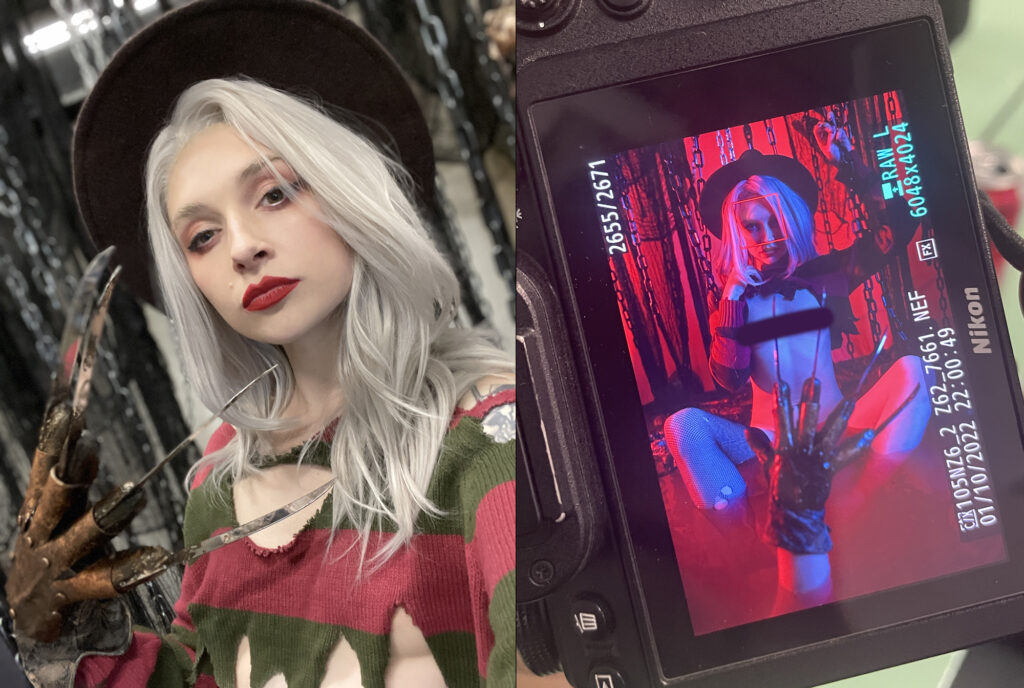 Photo from the back of Paul Hillier’s Camera, and the hand belongs to Jenn of Dangerous Ladies who was the real MVP of this whole thing.

As you can perhaps tell from the fact that all of these are Behind the Scenes photos, I need a little bit of time to do some editing so that you can have these — so! I’m also going to be re-releasing some older photosets on here. This is a great chance to grab some things that you might be missing from the back catalogue.

I’ve already posted some photos from my Interview with the Vampire Photoset, which is still one of my favourites … 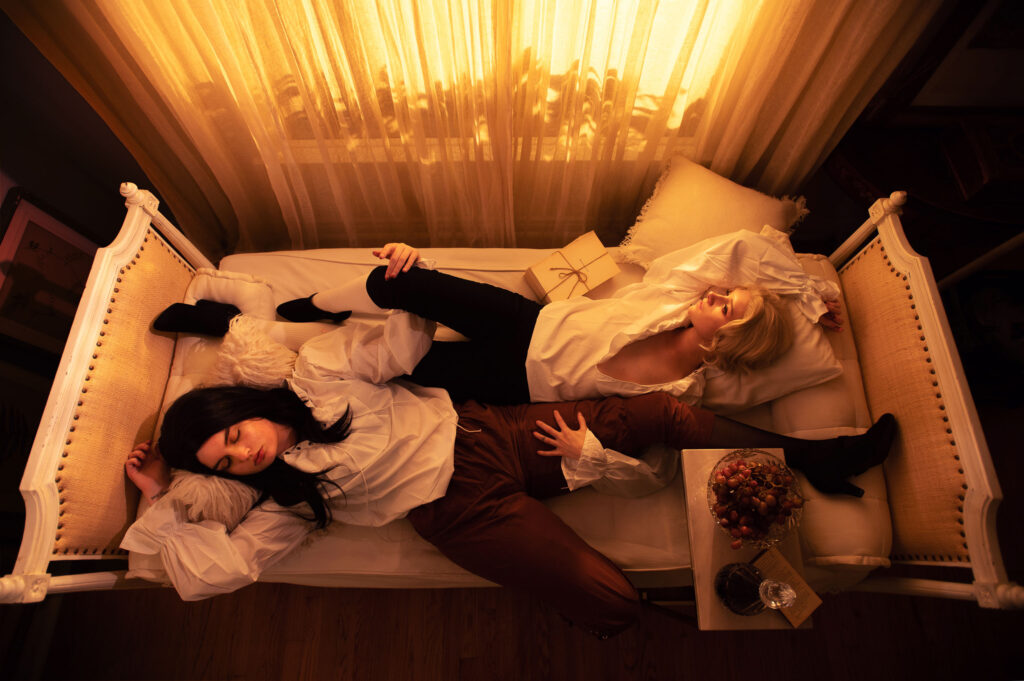 Photo by Paul Hillier; Louis is my friend Jordynne.

And it’s so timely once again, given the new Interview with the Vampire series coming out which I desperately, desperately would like to be good again.

I’m also going to be re-releasing some Death Note content, because a little bird told me that N*tflix is taking it down halfway through this month! 👀  If you’ve never seen Death Note, it stands up, IMO, and it’s definitely an anime that spawned a lot of anime-genre items.

But even if you haven’t seen it, I feel like you’ll probably be able to find it in yourself to appreciate the content! 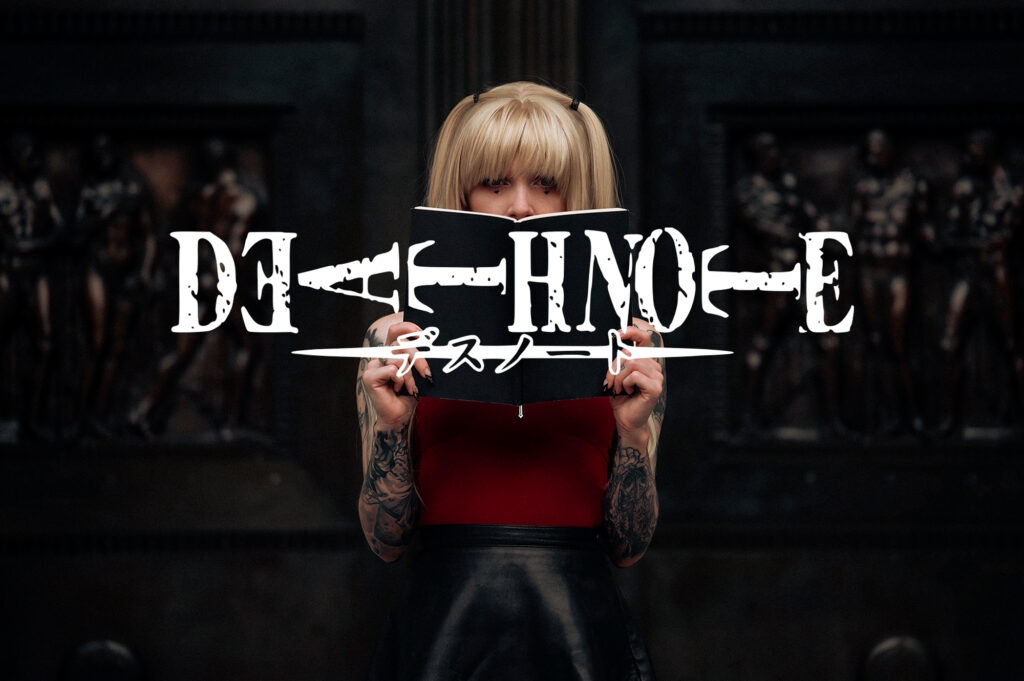 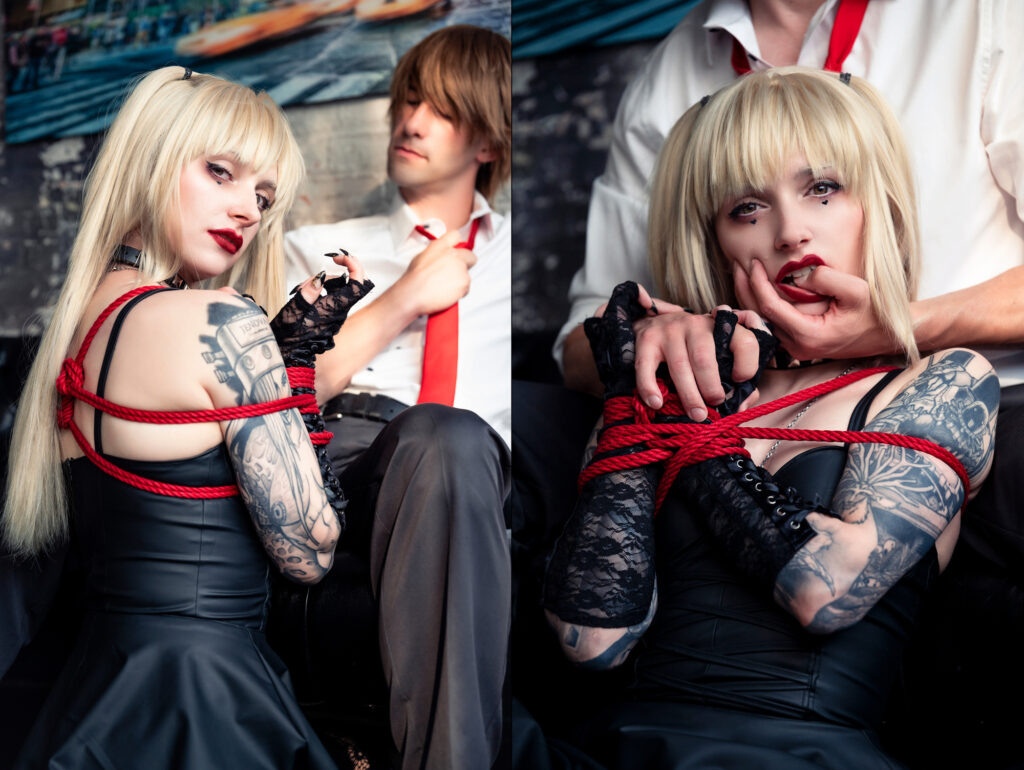 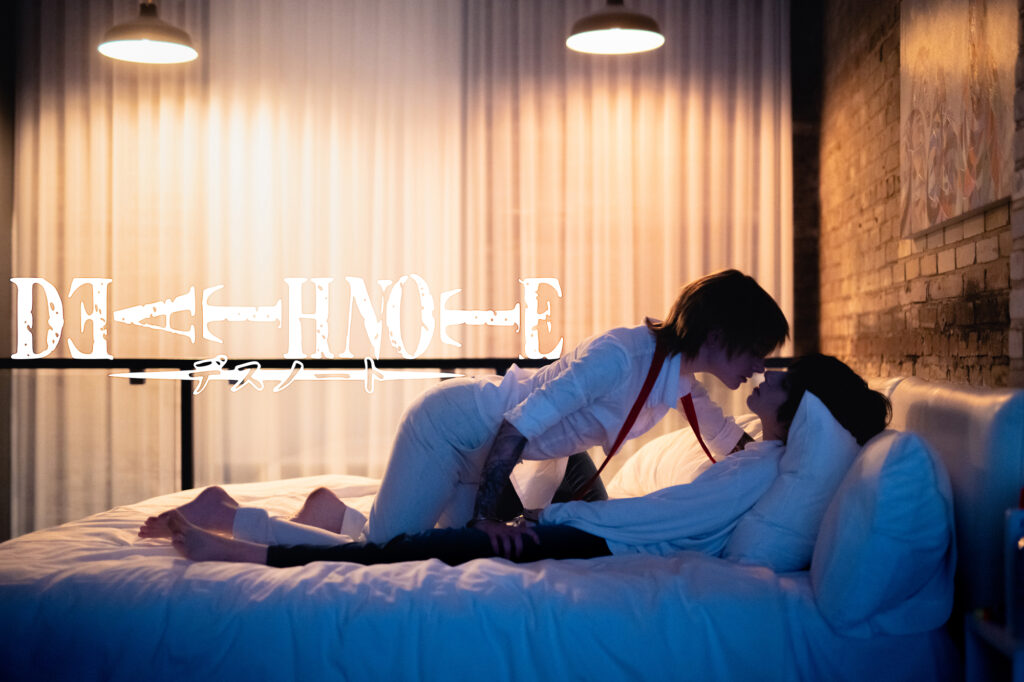 Just a hunch I have. 😇 If you haven’t seen my stuff of Misa, and her boyfriend Light, and his boyfriend L, then I heartily recommend!